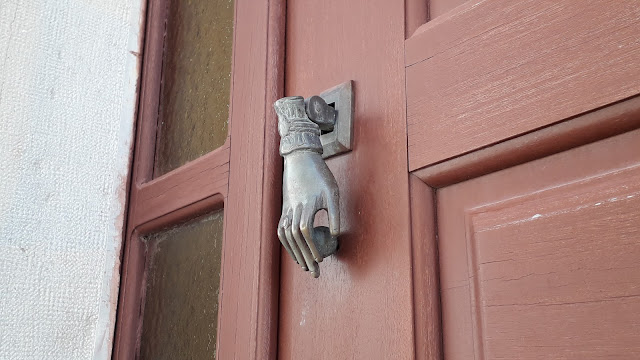 You may have wondered about these rather curious door knockers that adorn some of the older houses in the back streets of the Algarvian towns.

If you look closer you will notice that they are in the shape of either a woman’s hand, with long slender fingers, or a child’s.

The hand is slightly closed with the fingers together and the thumb apart, grasping onto a ball or a piece of fruit.

What are the origins of these door knockers?

The origins are not clearly defined but it is believed to be the  “Main de Fatima” – The Hand of Fatima, from Islamic vestiges or even an aesthetic idea that reappeared later.

Fatima is a common name among Arab women, rather like  Maria in Portugal.

The name “hand of Fatima”, (Main de Fatima) was most likely given by the French during their colonial period in North Africa, in the 19th century.

Knockers like these can be found on hundreds of doors all over the Mediterranean basin, from Egypt, the Maghreb; not just the Algarve.

Part of understanding a culture is understanding the language, through language we communicate and uncover a multitude of mysteries.

If you are looking for an Online Portuguese Course, you are knocking at the right door.

Manage Cookie Consent
To provide the best experiences, we use technologies like cookies to store and/or access device information. Consenting to these technologies will allow us to process data such as browsing behavior or unique IDs on this site. Not consenting or withdrawing consent, may adversely affect certain features and functions.
Manage options Manage services Manage vendors Read more about these purposes
View preferences
{title} {title} {title}